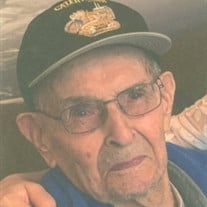 Earl D. Dorman, 97, of Batavia, passed on November 12, 2020 at Crossroads House in Batavia. He was born on June 20, 1923 in Batavia, to the late Leo and Fannie (Laramy) Dorman. He married Suzanne (Hopp) Dorman April 1, 1945 at the First Presbyterian Church in Batavia where he has been a member for 74 years. Suzanne passed away April 9, 2015 after 70 years of marriage. He is the last surviving graduate from Elba Central School Class of 1941. In addition to his lifelong work on the family farm, he drove truck hauling milk and fuel, worked as an Equipment Operator and Foreman for the Genesee County Highway Department over a span of 20+ years, and enjoyed working at the annual Brockport Central School Art Show for over 10 years. He was a founding member of the Town of Batavia Fire Department established in 1948. His family, neighbors, and friends will remember him for his love of the farm and his D2 CATS and John Deere equipment, travels, his willingness to lend a helping hand when needed, and conversations with friends and strangers with a cup of coffee and fried cake in hand. He will be missed and forever loved by his children Judy Whitney of Avon, Karen (Ray) Gabriel of Brockport, Craig (Beverly) Dorman of Batavia, and David (Mary Ann) Dorman of Batavia. Grandchildren Peter (Tammy Matt) Whitney, Greg (Aileen) Whitney, Michelle (Shawn) Skelly, Jeremy Gabriel, Trevor Gabriel, Jill (Josh) Daws, Kelly (Ryan) Olson, Joshua (Shawna) Dorman, Sarah (Matt) Ford, Mary Ellen (Jason Downs) Dorman, Amy (Jack) Moffitt, Caitlin (Shawn) Affolter, and Anna (Nathan DeVille) Dorman. 21 Great Grandchildren, several nephews, nieces, and cousins also survive. In addition to his parents and wife, he was predeceased by his brother James and wife Dorothy Dorman, son-in-law David Whitney, and sister-in-law Virginia and brother-in-law Charles Barone. The family would like to extend special thanks to his incredible caregiver crew this past year. We also appreciate the amazing care he received from the staff and volunteers at Crossroads House this past week. Earl requested that he be a part of the Anatomical Gift Program at the University of Rochester. The family welcomes donations in his memory to Crossroads House P.O. Box 403 Batavia, New York 14021; Town of Batavia Fire Dept. P.O. Box 417, Batavia, New York 14021; or First Presbyterian Church 300 East Main Street, Batavia, New York 14020. There will be no prior visitation. Private services will be held at the convenience of the family. He will be laid to rest in Grand View Cemetery.

Earl D. Dorman, 97, of Batavia, passed on November 12, 2020 at Crossroads House in Batavia. He was born on June 20, 1923 in Batavia, to the late Leo and Fannie (Laramy) Dorman. He married Suzanne (Hopp) Dorman April 1, 1945 at the First Presbyterian... View Obituary & Service Information

The family of Mr. Earl Delbert Dorman created this Life Tributes page to make it easy to share your memories.

Send flowers to the Dorman family.