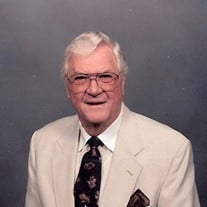 Bergen - Douglas W. Susat, 86, of Bergen, owner of Susat's Upholstery in Bergen, for 30 years prior to his retirement in 1988, died Tuesday, October 2, 2012 at Strong Memorial Hospital. Mr. Susat was born June 19, 1926 in Batavia, the son of the late Frederick and Elizabeth (Lyttle) Susat. He served honorably with the US Navy during World War II. He was a member of St. Brigid's Church since 1994, Loyal Order of Moose in LeRoy, American Legion Post 575 and VFW Post 11109 in Bergen, National AACA of America, Batavia Region AACA, Genesee Valley Antique Car Club, Sampson World War II Vets, BPO Elks, Model T Club, and the Bergen Fire Department. He was a former member of the Navy Club in Brockport, Model A. Club and a charter member of the Horseless Carriage Club. He was honored to serve as the chaplain at the dedication of the US Navy Memorial in Washington, DC. His wife, Caroline (Martin) Susat died in 1992. Survivors include his daughter; Michelle (Dale) Day of Phelps; 2 grandchildren, Karrie (Matthew) House of Phelps and Lance (Abbie) Rearick of Geneva; his companion, Jadwiga Syfert of Bergen and 5 great-grandchildren, Jacob Rearick, Chance Rearick, Walker Rearick, Carson House and Jordan House. He was the brother of the late Beatrice Bauman. Friends may call on Friday from 3 to 7 p.m. at H.E. Turner & Co. Funeral Home, 51 S. Lake St., Bergen. His Mass of Christian burial will be at 10 a.m. Saturday at St. Brigid's Church, 18 Gibson Street, Bergen. Burial with military honors will be in Grand View Cemetery in Batavia. In lieu of flowers, Masses may be offered in his memory.

The family of Douglas Susat created this Life Tributes page to make it easy to share your memories.

Send flowers to the Susat family.