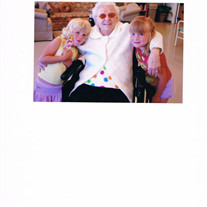 Dorothy G. Didget ELBA - Dorothy G. Didget, 97, of Indianapolis, formerly of Elba, died Saturday, October 27, 2012 at Rosegate Nursing Facility, in Indianapolis, IN. Mrs. Didget was born April 11, 1915 in LeRoy, the daughter of the late Ned and Helen (Underhill) Van Deusen. She was a member of the Garfield Park United Church of Christ and the Hallway Hustle, an exercise group at Rosegate. She was a former member of the Batavia First United Methodist Church. Her husband, Harold Didget, died in 1994. Survivors include a daughter, Louella Hill of Indianapolis, a granddaughter, Kathie (Peter) Zaleski of Richmond, IN; two great-granddaughters, Kayla and Mary Alice Zaleski of Richmond, IN; several nieces, nephews, great nieces, great nephews, great-great nieces and great-great nephews. She was the mother of the late Roger Didget, mother-in-law of the late David Hill and sister of the late Theodore Van Deusen and Donald F. Van Deusen. Friends may call from 11 am to 1 pm Saturday, November 10, 2012 at H.E. Turner & Co. Funeral Home, 403 East Main Street, Batavia, where services will follow at 1 pm. Memorials may be made to Garfield Park United Church of Christ, 743 E. Pleasant Run Pkwy, South Drive, Indianapolis, IN 46203. Burial will be in Elmwood Cemetery in Batavia.

The family of Dorothy Didget created this Life Tributes page to make it easy to share your memories.

Send flowers to the Didget family.