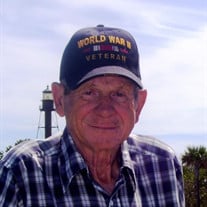 Donald J. Mumford Oakfield - Donald J. Mumford, 87, of Oakfield, a senior power plant engineer at Roswell Park Cancer Institute in Buffalo prior to his retirement in 1980, died Monday, October 29, 2012 at his home, in Oakfield. Mr. Mumford was born July 7, 1925 in Cooperstown, NY, a son of the late Howard and Hallie Mumford. He worked for New York State for 30 years. He honorably served with the US Army during WWII as an amphibious tractor driver in Luzon, Ryukyus and Southern Philippines. He attended Oakfield Alabama Baptist Church, was the Vice Commander and Chaplain of the Ira Spring VFW Post 273 in Oakfield, and a volunteer for Volunteers 4 Animals and also volunteered at the New York State Veteran's home in Batavia. He enjoyed having coffee with friends at Allis, building projects with family and wintering in Ft. Myers, FL. He was an active outdoorsman and liked to hunt, fish and take care of his property. He was always quick to help people and was always devoted to his family. He is survived by his wife, Mary Louise Peterson Mumford whom he married September 10, 1981; 6 children, David (Jeanie) Mumford of MT, Janet (James) Goodenbery of Oakfield, Barbara (Ronald) Thurber of Basom, Gerald (Cynthia) Peterson of FL, Catherine (John) Marchese of Basom, and Russell (Debra) Peterson of TN; 26 grandchildren, 14 great grandchildren and nieces and nephews. He was the father of the late George Mumford and brother of the late Earl Mumford, Roland Mumford and Nina Clarke. Friends may call on Wednesday from 5 to 8 p.m. at Burdett & Sanford Funeral Home, 11 Maple Ave., Oakfield where services will be at 11 a.m. Thursday. Flowers are gratefully declined. Please make memorials to Oakfield Alabama Baptist Church, 2210 Judge Road, Oakfield, NY 14125 or to Volunteers 4 Animals, P.O. Box 1621, Batavia, NY 14021. Burial will be in Cary Cemetery in Oakfield.

The family of Donald Mumford created this Life Tributes page to make it easy to share your memories.

Send flowers to the Mumford family.