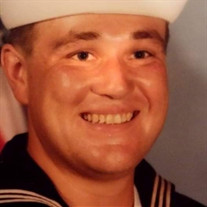 Batavia - Daniel W. Shea, 60 of Batavia, passed away unexpectedly on Tuesday, (September 21, 2021) at his home. Mr. Shea was born September 29, 1960 in Batavia, a son of the late Wayne and Doris (Schneider) Shea. Daniel attend Batavia High School where he played football. Following high school, he served honorably with the United States Navy during which time he traveled to several countries. He played guitar in a band and was in the Drum & Bugle Corps in years past. Mr. Shea enjoyed collecting baseball cards and coins and was a talented artist. He also enjoyed hunting, cooking, and cheering on the Red Sox and Buffalo Bills. He was very fond of his work at the Batavia VA Medical Center and the time he spent working with Jerry Arena. Daniel is the husband of Beth (Kwiatkowski) Shea of Batavia. The two were married on June 27, 1987. Surviving along with his wife are his sons, Daniel Haynes of Caledonia, Brandon (Ashley) Shea of Illinois, and Scott (Kaila Smith) Shea of Batavia; a grandson, Anthony Shea of Illinois; Brothers, Thomas (Debbie) Shea, and Timothy (Kimberly) Shea both of Batavia; a sister, Kathleen Shea of Batavia; nephews, Ryan, Dylan (fiance Alyssa Wolford), and Kyle (Catie Boerschlein) Shea all of Batavia; nieces, Addison Shea of Batavia, and Faith (Eric) Ware of Maryland. Aunts, Uncles, and Cousins also survive. Family and friends are invited to call on Thursday, from 3 to 7 p.m. at H.E. Turner & Co. Funeral Home, 403 East Main Street in Batavia. Daniel 's Funeral Service will be held at 11:00 a.m. on Friday, (October 1, 2021) at the funeral home. Burial will be in Western New York National Cemetery in Pembroke. In lieu of flowers, memorials may be made to American Kidney Association at www.kidneyfund.org. Please leave a condolence, share a story, or light a candle at www.bataviafuneralhomes.com.

The family of Daniel W. Shea created this Life Tributes page to make it easy to share your memories.

Send flowers to the Shea family.