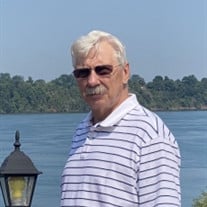 Daniel Julian Plapus. 74, of Batavia, passed away on Thursday, December 30, 2021. He was born July 26, 1947 in Batavia, NY, a son of the late Julian Plapus and Sophie Kowalczyk Plapus. He resided in Batavia, NY, Conesus Lake, NY and Bonita Springs, FL. He was “invited” as he would say to join the Army in 1969, where he proudly fought for our country and served with the 5th Mechanized Armor Division known as the Red Diamond in the Vietnam War. He was humbled to be supporting the Marines along the DMZ line. He was awarded several medals including the Bronze Star. He seldom spoke of his time in Vietnam, but on one rare occasion, he noted one of the proudest moments in his life was that no one under his leadership lost their lives. He earned a journeyman pipefitter status, working first at Doehler-Jarvis, then joining General Motors Rochester Products, and retiring from General Motors Tonawanda/Buffalo in 2008. He was a member of VFW Post 1602 serving as quartermaster for 24 years, American Legion, Loyal Order of the Moose, and the Fraternal Order of the Eagles. He volunteered at the St. Joseph’s Church Lawn Fete for several years. He also volunteered at Notre Dame High School, and helped coach his daughter’s soccer team. Dan is survived by his loving wife of 50 years Joan Elmore Plapus, his precious daughter, Danielle Plapus (Christopher George) of Buffalo, NY and his beloved granddaughter Roane George. His “girls” were the pride and joy of his life! He was happiest when they were with him, and cherished the time they spent together traveling the world. His last overseas trip was to show his granddaughter his ancestral roots in Poland. Other survivors include his sister, Gloria (late Vincent) Gautieri, his brother, David Plapus; brother-in-law, Dennis Elmore (Diane Hale); sisters-in-law, Carol (Glenn) Hilchey, Peggy (Larry) White, and Cindy Elmore; family pets including Linus the Great Dane and Fat Louie the cat, as well as many nieces, nephews, and cousins. There will be no calling hours due to COVID. The family will celebrate his life at Mass when conditions permit. He will be laid to rest in Western New York National Cemetery. Donations in his memory may be sent to Crossroads House, P.O. Box 403, Batavia, New York 14021.

The family of Mr. Daniel Julian Plapus created this Life Tributes page to make it easy to share your memories.

Daniel Julian Plapus. 74, of Batavia, passed away on Thursday,...

Send flowers to the Plapus family.