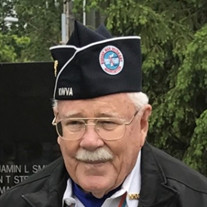 Byron - Conrad C. Gifford Sr. of Byron, passed away on September 14th, 2020, his 90th birthday at Crossroads House in Batavia. He was preceded in death by his parents Raymond and Roselin Gifford of Oneonta, his brother Gordon and his beloved wife Marie E. (Parsons) Gifford. Conrad served his country as a member of the US Army and a veteran of the Korean War where he was awarded his combat infantry badge with 5 bronze stars as well as several other decorations. During the war, Conrad served in both the 24th and 25th Infantry Divisions, initially with the 29th Regiment and then as a proud member of the 27th Regiment Wolfhounds. A life-long patriot, Conrad was an avid member of the VFW, the Korean War Association, the American Legion and the Honor Guard. As a notable entrepreneur in the Batavia area, Conrad was the original owner and proprietor of Golden Coin Laundry and the Golden Mobile Home Park as well as several other businesses and properties. Conrad was a loving father and grandfather who will be deeply missed by his family. Conrad is survived by his son Conrad Gifford Jr. and his wife Margaret, his daughter Colleen Lamie and her former husband Larry, his grandchildren: Chelsie Lamie and husband David Alfonso, Brad Lamie and partner Alex Wood, and Callista Dehart and husband Jason, as well as his great-grandchildren: Michael Alfonso, Henrey Alfonso and Brody Ace. Services will be held at a future time when Conrad and his wife Marie are laid to rest in the future Western New York Veterans Cemetery in Pembroke. Memorials to Conrad’s legacy can be made to the Korean War Veterans Association, PO Box 407, Charleston, IL 61920 or Crossroads House, PO Box 403, Batavia, NY 14021 or can be made online at www.CrossroadsHouse.com. Arrangements for Conrad were entrusted to the care of H.E. Turner & Co. Funeral Home, 403 E. Main St. in Batavia. Please leave a message of condolence, share a story, or light a candle at www.bataviafuneralhomes.com.

Byron - Conrad C. Gifford Sr. of Byron, passed away on September 14th, 2020, his 90th birthday at Crossroads House in Batavia. He was preceded in death by his parents Raymond and Roselin Gifford of Oneonta, his brother Gordon and his beloved... View Obituary & Service Information

The family of Mr Conrad Clinton Gifford, Sr. created this Life Tributes page to make it easy to share your memories.

Send flowers to the Gifford family.