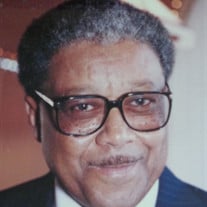 Batavia - Mr. Charles E. Thornton, 77, of Batavia, died Thursday (June 13, 2013) at Strong Memorial Hospital in Rochester. Mr. Thornton was born June 3, 1936 in Williston, TN, a son of the late Paul and Winnie Ann (Jackson) Thornton. His wife, Betty Jo Thornton, died June 10, 2007. He is also predeceased by a brother, John Thornton. After his retirement from Wegmans, where he worked in the warehouse, Mr. Thornton enjoyed catching up and spending time with his fellow employees. He loved singing, gardening, spending time with his grandchildren and was a member of the Batavia House of God. Survivors include his three children, Tonya Love of Batavia, Clarence "Sonny" Love of Batavia and Jackie Clayburn of Washington, DC; two brothers, Willie Thornton of Henning, TN and Larry (Ernestine) Thornton of Somerville, TN; three sisters, Lillie Pride, Genell (Hardy) Strickland and Lizzie Briggs, all of Somerville, TN. Nine grandchildren, six great-grandchildren and several nieces and nephews also survive. Calling hours are Friday from 11 a.m. to 1 p.m. at the H.E. Turner & Co. Funeral Home, 403 East Main Street, Batavia. Services will be at 1:00 p.m. on Friday, also at the funeral home. Burial will be in Elmwood Cemetery, Batavia. Memorials may be made to a charity of the donor's choice.

The family of Charles Thornton created this Life Tributes page to make it easy to share your memories.

Send flowers to the Thornton family.