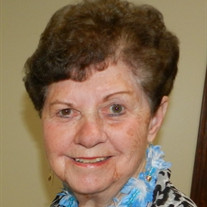 Bergen - Barbara W. Stein, age 89, longtime member of St. Brigid Church in Bergen, passed away on Saturday, March 6, 2021 at St. Ann’s Community in Rochester. Mrs. Stein was born April 23, 1931 in Warsaw, a daughter of the late Charles Francis Wright and Rosamond Eddy Wright. Barbara is the wife of Joseph F. Stein who passed away on January 30, 2010 and sister of the late Robert Wright. She is survived by her daughters, Julie (Thomas) Machell of Webster and Marcia (Randall) Kehl of Churchville; five grandchildren, Lauren, Lindsey, Nicholas, Matthew and Brendan; many nieces and nephews; and sister-in-law Betty (David) Mullen. Barbara grew up on a farm in Perry/Warsaw and was a 1949 graduate from Perry Central High School. She worked at Eastman Kodak for 10 years, then raised a family with the love of her life, Joe. They met at a square dance in Caledonia. Barb and Joe enjoyed traveling and spending their winters in Haines City, Florida. Barbara was known for her sewing, baking, going to casinos, bingo, coffee with friends, craft fairs, and spending time with her grandchildren. She was also an active member of Triangle Club, Ladies of Charity, Ladies Fire Auxiliary, and active in many volunteer activities. A special thanks to St Ann’s Community for caring for Barbara as one of their own family. There are no prior visiting hours, due to the ongoing pandemic. Barbara’s Mass of Christian Burial will be on April 24, 2021 at 11:00 am at St. Brigid Church, 18 Gibson St. Private Christian Burial will be held at St. Brigid Cemetery. In lieu of flowers, donations can be made to Parkinson’s Foundation in her memory, (parkinson.org).

The family of Mrs. Barbara W. Stein created this Life Tributes page to make it easy to share your memories.

Send flowers to the Stein family.