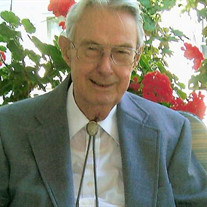 Clifton Springs - Alton Robert Tooley of Batavia and Clifton Springs, died peacefully October 23, 2012 at age 95. Mr. Tooley was born in the Town of Batavia on January 20, 1917, the son of James W. and Myrtie A. Kilian Tooley. After graduating from Batavia High School where he lettered in track, he attended business school in Rochester. Mr. Tooley was a World War II veteran and served in the United States Army as a Corporal aboard the USS Cristobel, an Army transport vessel, for over 4 years. In 1943, he married Althea E. Rifenburg Tooley. They were married 49 years when she preceded him in death in 1992. Mr. Tooley was a member of the First Presbyterian Church of Batavia for more than 60 years, and spent his career with the Prudential Life Insurance Company, retiring after 33 years of service. He was a member of the American Legion, and also a volunteer at the Batavia Senior Center. Mr. Tooley is survived by three daughters: Cheryl (Robert) Bassett of Lakewood, CO; Coleen (Andrew) Oleski of East Orleans, MA; and Janice (William) Thompson of Farmington, N.Y.; a sister, Glenna VanDeBogart of Batavia, (a sister, Doris Tooley Earll, predeceased him); 2 sisters-in-law: Jean Herrick and Carol Rifenburg; 6 grandchildren: Scott, Jason, Peter, Shannon, Gregory, and Matthew; and 5 great grandchildren: Vincent, Tyler, Alanna, Isla, and Cameron; and numerous nieces, nephews, and cousins. Mr. Tooley's home on East Avenue in Batavia was his "castle" for over 55 years, and a great source of pride for him. Sitting on the front porch with family and friends, enjoying conversation and the wicker rockers, was a favorite pastime for him. Alton Tooley will be remembered by family and friends for his smile, his sense of humor, his sweet tooth, his thumbs up positive attitude, his red geraniums, and his love for country and respect for our flag. The memorial service will be held on Saturday, October 27th at 2:00 pm at H. E. Turner and Co. Funeral Home, 403 East Main Street, Batavia. The family will receive visitors from 1:00 - 2:00 prior to the service with burial following at Grandview Cemetery. In lieu of flowers, donations may be made to House of John hospice, 14 Spring Street, Clifton Springs, New York 14432 or to the First Presbyterian Church in Batavia, 300 East Main Street, Batavia, New York 14020.

Clifton Springs - Alton Robert Tooley of Batavia and Clifton Springs, died peacefully October 23, 2012 at age 95. Mr. Tooley was born in the Town of Batavia on January 20, 1917, the son of James W. and Myrtie A. Kilian Tooley. After... View Obituary & Service Information

The family of Alton Tooley created this Life Tributes page to make it easy to share your memories.

Send flowers to the Tooley family.